The Story Behind the Red Umbrella

I am asked almost every day what inspired me to start creating paintings with red umbrellas. In 2002 I traveled to Italy just to paint and prepare for an exhibit of my Italian works when I returned to the States. One, small painting titled, “Venetian Snow” was almost finished, but as I stood back and reassessed the composition, I realized that while I liked the mood that the greys, browns, and blues created, it needed some additional color. I proceeded to add a figure with an umbrella feeding the seagulls by the Venetian lagoon. Through the umbrella, I could introduce a color; maybe yellow or blue or … and the nomination went to red. Somehow, red just seemed to be the cheer needed in an otherwise leaden color palette. 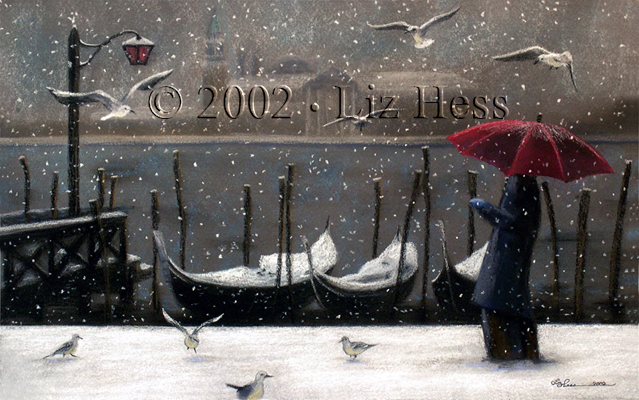 This is the very first image Liz painted with a red umbrella, launching what would come to be known as the Red Umbrella Collection.

This painting was just one of an entire exhibit of Italian works which I unveiled later that year. This was also the very first painting to sell out of the entire collection.

The following year, I traveled to France to paint, and decided to take this same figure with the red umbrella and incorporate it into various scenes from Paris. Again, when I exhibited the body of French works later that year, the pieces with the figure holding the red umbrella were the first to sell of the entire French show.

I realized that, while I enjoyed painting this figure into various settings where I had traveled, customers were just as enthusiastic about collecting it. Thus was born the Red Umbrella Collection, which continues to grow each year as I continue to travel.

It has since been to the New England states, Savannah & Charleston, England, Scotland, Switzerland, France, the Greek Isles, back to Italy, and most recently, to Ireland. There I found much artistic inspiration among the green hills and hedgerows, the sweeping coastal vistas, the quaint, thatched-roofed cottages, and the brooding, rugged, and misty interior where I found the occasional clump of Celtic crosses in an ancient graveyard near a church ruin.