A Couple Is Engaged at the Gallery 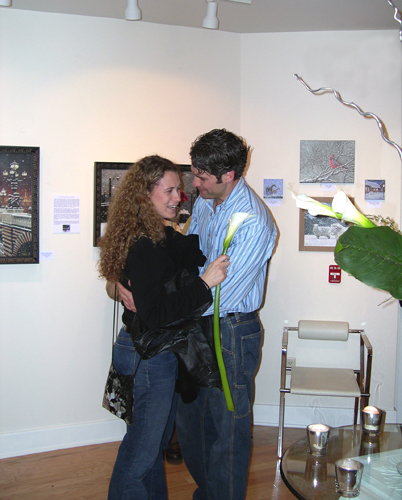 He Proposes! (the ring is in the flower).

Kirsten Johnsen didn’t realize that her date with beau, Tim Martin (both of Lancaster) would result in their engagement during a First Friday evening at Liz Hess Gallery. Unbeknownst to her, Tim had arranged ahead of time with Liz that the diamond ring he had purchased would be hidden within the center of a lily. The lily was then carefully arranged within the center of the large bouquet on the table in the middle of the Gallery.

On a busy First Friday with a crowd of people filing in and out of the gallery all evening, Tim and Kirsten also happened to be part of that crowd making it’s rounds to all the galleries on Gallery Row. When Kirsten saw the beautiful bouquet inside the Gallery, Tim asked Liz in front of her if he could have one of the lilies for Kirsten. Liz pulled out the one with the diamond hidden deep within the center of the lily, which Tim then handed to Kirsten as he got down on one knee to propose. When the crowd saw what was taking place, they parted and formed a circle around the couple, and then applauded and cheered when Kirsten accepted Tim’s proposal.

The couple has now been happily married since the summer of 2007.